Vegetables That Start With G

Welcome to the world of vegetables that start with the letter “G”!

These are not only delicious but also packed with essential vitamins and minerals that are vital for maintaining a healthy diet.

From Garlic to Golden zucchini, these vegetables are versatile and can be used in a variety of dishes, from salads to soups, stews, and casseroles.

Not only that but also, some of them may have potential health benefits that you’ve never even heard of before.

In this article, we’ll take a deep dive into some of the most popular vegetables starting with G, as well as some lesser-known options that are worth trying.

Whether you’re a seasoned home cook or a beginner in the kitchen, this guide will give you all the information you need to add some delicious and nutritious greens to your meals.

Vegetables that start with G

Garlic is a pungent bulbous herb that is commonly used in cooking.

It is a staple ingredient in many cuisines around the world and is known for its strong, distinctive flavor and aroma.

Each bulb of garlic contains several cloves, which are the individual sections of the bulb that can be peeled and used for cooking.

Garlic is usually used fresh, but it can also be dried, powdered, or made into a paste.

It’s best to use fresh garlic whenever possible, but minced or powdered garlic can also be used in a pinch.

Garlic can be stored in a cool, dark place for several months, but it’s best to use it within a few months of purchase to ensure the best flavor and nutritional value.

Garlic is a good source of vitamin C, vitamin B6, and manganese, and has been shown to have potential health benefits such as reducing the risk of heart disease and cancer.

It also has antioxidant properties and can help to boost the immune system.

Garlic is also believed to have antimicrobial properties, which means that it may help to fight off certain types of bacteria, viruses, and fungi.

Green bell peppers are a type of sweet pepper that is commonly used in cooking.

They are bell-shaped pepper that is typically green in color but can also be red, yellow, or orange.

They have a mild, sweet flavor and are a good source of vitamin C and vitamin A.

Green bell peppers are versatile and can be used in a variety of dishes, from salads and sandwiches to soups, stews, and casseroles.

They can be eaten raw or cooked and can be paired with a variety of herbs, spices, and other ingredients to create delicious and healthy meals.

They can be sliced, diced, or chopped, and can be sautéed, grilled, or roasted.

They should be stored in the refrigerator and used within a few days of purchase. 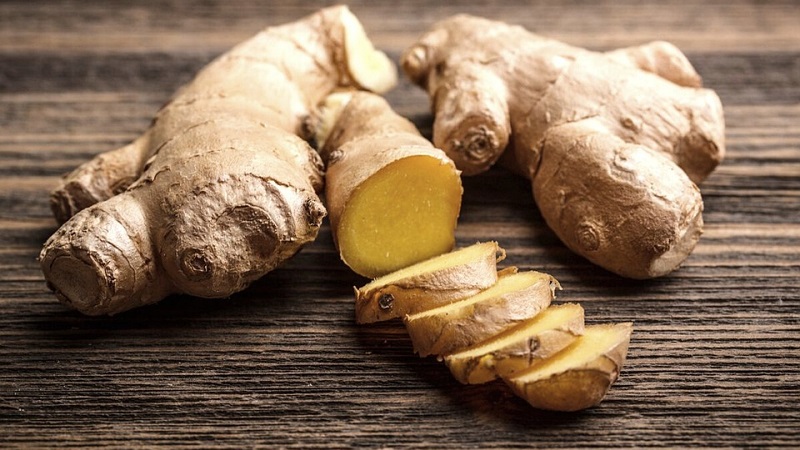 Ginger is a root vegetable and it is commonly used as a spice in cooking and traditional medicine.

It is a perennial plant that is native to Southeast Asia.

It has a pungent, slightly sweet flavor and is known for its strong, distinctive aroma.

It is also used to make tea and is known for its medicinal properties, such as reducing nausea and inflammation.

Research has also shown that ginger may have potential benefits in the treatment and management of certain health conditions such as reducing blood sugar levels, lowering cholesterol and triglycerides, preventing certain cancers, improving brain function, and protecting against Alzheimer’s disease.

Ginger should be used in moderation and it is not recommended for pregnant women, people with gallstones, or taking blood-thinning medications to consume ginger in high doses.

Green onions, also known as scallions or spring onions, are a type of onion that is commonly used in cooking.

They are long, thin, green onion that is typically harvested when they are still young and tender.

They have a mild, sweet flavor and are a good source of vitamin K and vitamin C.

They are often used as a garnish or as a flavor enhancer in a variety of dishes, such as salads, soups, and stir-fries.

They can also be eaten raw, grilled, or used as a topping for sandwiches and tacos.

They are low in calories and are often used in weight loss and healthy eating plans.

They are a staple in Asian cooking and are often used in dishes like ramen, bibimbap, and Chinese fried rice.

They are also commonly used in Mexican and Latin American cuisine, such as in salsa, guacamole, and as a topping for tacos and burritos.

Ground cherries are small yellow fruit encased in a papery husk, similar to a tomato in taste and texture.

They are related to tomatoes but have a distinct flavor that is often described as a combination of pineapple, strawberry, and tomato.

Ground cherries are typically yellow or orange in color when ripe and are about the size of a cherry tomato.

They are versatile and can be eaten fresh, cooked, or used in preserves.

They can be eaten as a snack on their own, or added to salads, fruit cups, or pies. They can also be used to make jams, jellies, and chutneys.

Ground cherries are relatively easy to grow, and can be planted in the spring or in late summer.

They are a good source of vitamin C, vitamin A, and potassium.

You may find them at farmers’ markets or specialty grocery stores.

Galangal is a rhizome (root) similar to ginger and turmeric, it’s commonly used in Asian cuisine.

It has a slightly spicy and fragrant taste and is a good source of antioxidants and anti-inflammatory compounds.

Galangal is most commonly used in Thai, Indonesian, and Malay cuisine.

It is a key ingredient in dishes like tom yum soup, massaman curry, and nasi goreng.

It can also be found in Indian and Middle Eastern cuisine.

Galangal can be found fresh, dried, or powdered, and can be used in a similar way to ginger.

The powdered form can be used as a seasoning.

Galangal is considered to have medicinal properties, it’s said to have anti-inflammatory and anti-cancer effects, and is also said to be beneficial for digestion, as well as respiratory and cardiovascular health.

Giant red amaranth is a type of leafy green that has large, deep red leaves and a slightly bitter, slightly sweet flavor.

It is also known as Chinese spinach.

Giant red amaranth is a fast-growing, heat-tolerant crop that can be planted throughout the year in tropical and subtropical regions.

It can grow up to 2 meters tall and can be harvested within 2-3 months after planting.

The leaves, stems, and seeds of the plant are all edible. The leaves can be used in soups, stir-fries, and salads and the seeds can be ground into flour.

It is a good source of vitamin A, vitamin K, and iron. It is considered as a nutritious leafy vegetable.

Garlic chives are a type of chives that has a strong garlic flavor and aroma.

It is commonly used in Chinese and Asian cuisine.

They have long, thin, green leaves and small, white, star-shaped flowers. The leaves and the bulbs of the garlic chives are both edible.

They are often used as a garnish, a seasoning, or in stir-fries, dumplings, and soups.

They can also be used in place of regular chives or garlic in any recipe.

It is a good source of vitamin A and vitamin C.

Gherkin cucumber is a small, pickling cucumber that is typically used to make pickles.

Gherkin cucumbers are usually about 2-4 inches long and have thick, bumpy skin.

They have a sweeter and more complex flavor than regular cucumbers and are less watery.

Gherkin cucumbers are used primarily in pickling and canning, but can also be eaten fresh.

They can be sliced and used in sandwiches, salads, and relishes.

It is a good source of vitamin K and potassium.

Gherkin cucumbers are easy to grow and can be planted in the spring. They prefer full sun, well-drained soil, and regular watering.

They can be grown in gardens or in pots.

They are also widely available at supermarkets and farmer’s markets.

Gai lan, also known as Chinese broccoli or Chinese kale, is a leafy green vegetable that is native to China.

It is closely related to broccoli but has longer stalks and larger leaves.

It has a slightly bitter and nutty flavor, and the stems have a more tender texture than regular broccoli.

It is often stir-fried with garlic, oyster sauce, and sometimes meat, it can also be used in soups and steamed dishes.

Gai lan is easy to grow and can be planted in the spring or fall.

It is a good source of vitamin A, vitamin C, and calcium.

Other vegetables that start with G

From garlic, green beans, and green bell pepper which are commonly used in many cuisines, to lesser-known varieties like gherkin cucumber and giant red amaranth which are used primarily for pickling and canning.

These vegetables can be used in a variety of dishes, from soups and stews to salads and sandwiches, making them a versatile addition to any diet.

They are low in calories and high in vitamins and minerals.

Some of them like Garlic, Green onions, and Galangal are considered staple ingredients in many cuisines, and some of them have medicinal properties.

G vegetables are easy to find in supermarkets, and farmer’s markets and also easy to grow in gardens.

So next time you are at the market, don’t forget to pick up some G vegetables and experiment with them in your cooking!