Is Salmon Halal or Haram in Islam?

People of all religions should eat more fish, as it is the perfect way to include healthy fats and protein, and of course, to buy the real deal, to buy something that is worth buying, that is quality, and preferably organic.

When it comes to seafood, it is maybe a bit easier for the people of the Islamic religion to know if they can eat it, as the general rule is that all seafood is Halal approved.

Of course, there are some opposing opinions, but this is the general rule, and it needs to be taken care of in some smaller details.

It is based on the quotation from Qur’an – where it is said that it is by Islamic law to go on the sea and catch what is inside and eat and that it does not pose any difference if that creature or a plant is dead or alive.

Because this notes greatly that what is captured from the sea is adequate, it incorporates plants like seaweed also.

Naturally, it is said that all food, even that that comes from the sea excludes anything dangerous like maybe fish that is toxic and plants that can make you feel sick as they are allergens.

Because they are permitted, all that comes from the sea, just like fish and everything else, is oftentimes part of Islamic cuisine.

One more reason why such food is popular around Muslim countries lies in the fact that this is a great and tasty option to eat proteins, and not eat meat, that could not be Halal approved.

Having in mind the fact that seafood is a good option since it does not include the killing of the animal, in the Halal way, just like some other protein sources like meat for example.

Meat can be a harder choice, but when it comes to fish the choice may be a bit easier.

This makes the decision-making process when you eat something, much easier.

This is specifically good for entire fresh seafood derivatives sold by entrusted sellers, where you know what you are buying.

But, always have in mind, that when you purchase anything from an international chain of supply, you can never be as sure.

This is particularly true when it comes to seafood and fish since they can go through numerous steps along the way, and along that way, that can be pretty long, there can be stored and processed and frozen, so that kind of food, in the end, is not Halal.

This is the process that makes it a bit harder to specify what a food item includes and to make any presumptions about the procedure.

Maybe there was some additive that are haram, and maybe there are some forbidden product used.

Speaking of this, we must say that bacon is one of the most common problems, and yes you are not eating the bacon itself, but it is a component in some recipes or maybe a white whine, so you need to be extra careful when it comes to seafood and its consumption. 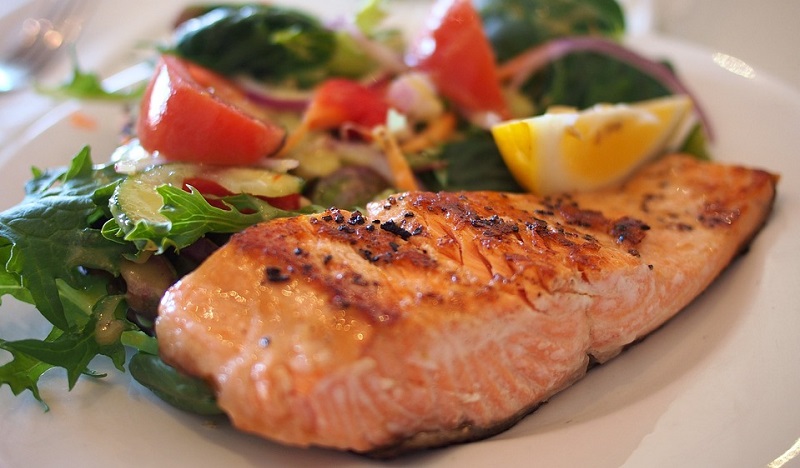 When there is delicious, juicy, and healthy food in our dishes, then we know that we are doing something good for our health, and at the same time, we fulfill all our senses with delightful smells and tastes.

There are very few foods that we consume that are nutritionally concluded on their own, and at the same time quite flavorful.

Luckily, salmon is just such a food, and that is its main advantage, and that is why it stands out, not only from other fish specialties and fish but also from other foods that we use in our daily diet.

It belongs is an unsystematized group of fish belonging to the trout family (Salmonidae).

Salmon has a thin, oblong body, flattened at the sides, with silver skin and a branched short tail.

It has that very specific look and very specific taste also – you can also recognize salmon as on its head and also on the upper part of the back are small black dots.

Atlantic salmon reaches a length of up to 1.5 m, and it is very tasty.

Fortunately, Europeans uncovered salmon many years ago, and certain information indicates that salmon has been eaten and hunted for thousands of years, which only establishes the fact that salmon is a truly high-quality food, the benefits of which were known long before.

Many prefer salmon specifically because of its specific and irresistible taste, however, many do not even know how healthy salmon is.

If you have regularly consumed salmon up to now, it indicates that you have reduced the risk of a heart condition.

In general, salmon is the best when it comes to our cardiovascular health because it is the potassium located in salmon that affects the blood stress level.

Also, it is essential as food for better functioning of our brain and better thought.

Speeding up the metabolism is also one of the advantages, and salmon helps us to keep our satisfactory weight.

Eye, joint, and bone health is also associated with the consumption of this type of seafood.

It is worth saying that salmon is a fish that migrates and lays eggs in fresh waters, and after some time the small fish move to the ocean.

The salmon catch is tied to June when the migration begins, and then it is bought directly from the fishermen.

We have spoken of this before, and even if you are not a Muslim and you simply want to eat food that is healthy and that comes from a good source, then this is valuable for your also.

Is Salmon Halal or Haram In Islam?

So, there are so many reasons why should we eat fish, and salmon especially, for its wonderful befits for human health and also for its great taste, but how can you be sure it is halal?

In this piece, we will examine the Islamic outlook on salmon and debate whether is salmon halal or haram based on Islamic regulation.

It is a safe guess that Salmon is Halal in Islam, having in mind that you have bought it from a person you have a trust, and that is not frozen or processed in any way, since this may be the reason why salmon is not Halal, as some additives may be the real problem.

Buying fish fingers or crabs, or crab cakes may be the bigger risk – it all depends on the way of its preparation.

Now, there is one matter, that must be taken into the consideration here – seafood that has been farmed, and there it maybe was been fed with the processed protein emanating mostly from pigs and poultry.

This seafood and fish, produced in this way is much cheaper, but it raised a question regarding its Halal status.

Also, have in mind that more than half of the global fish market comes from this source, and awareness is mandatory here.

And still, there are those brands that have dealt with this matter and have a large number of products (seafood) that is Halal-certified.

So, if this matter is out of the picture, it is safe to say that salmon is halal, as the majority of Islamic thought considered it to be Halal, all but the Hanafi school of thought, which is one of the oldest and it contemplates that all non-fish animals to be prohibited.

They do not allow for example mussels and squid but allow shrimp.

It should also be said that this opinion is thought to be a minority opinion inside Islamic law, and numerous Muslim groups exuberantly incorporate crabs or shrimp into their food.

If you are still confused regarding food, and in this case salmon, then you should lean on the opinion of the Islamic Services of America, as it is a trusted Halal certifier.

This preserves people a lot of time and money required to estimate each food item separately.

Someone who knows what are doing has made this judgment for you, and it is much easier to buy food when you know that it has this type of certificate.

So, knowing that a certain product has a Halal certification allows defining any indecision about whether or not your seafood-based items are permissible.

So, there is much to say regarding this topic, but we could say that it is halal based on the majority of Islamic thought or almost all.

It is said that various types of food from the sea are permitted, even though they are animal or plant.

In their Holy book, it is said that Mighty Allah has allowed all that comes from the sea – it is halal to eat mortal animals from the sea and dead fish, and salmon are incorporated into this group of food products.

And, additionally, all of this also includes smoked salmon, but be careful that it does not have any non-halal component, as it may happen. 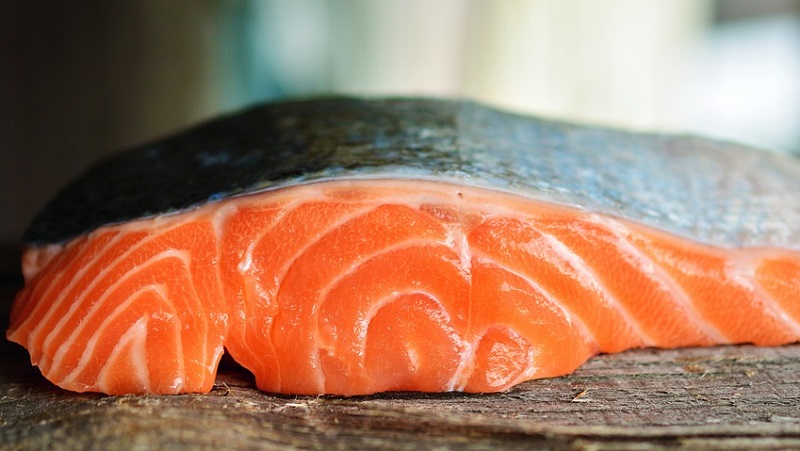 So, we have seen that there are many reasons why you should eat more fish, and this is particularly true when it comes to Salmon, as it is one of them that has almost all the benefits, a so-called perfect protein for a human being.

Salmon is one of the most famous fish in the world because people consume it for different reasons – to lose weight, to health, and to muscle mass. It is not as expensive as truffles, for example, but we can certainly count it as a delicacy.

And in Ireland, for example, salmon can be found in delicatessens at airports.

In the heart of Dublin, there is a shop with a tradition of 180 years, which preserves the spirit and tradition of the Irish people and offers all kinds of delicacies, led by salmon.

But many other countries are famous for salmon production – the best quality, the one that comes from Canada is the best one.

To recap, salmon and all sorts of seafood (here we can include shrimps or crabs) are all seen as Halal and permitted.

They can be animals or plants.

They can be dead or alive, they are permitted.

Nevertheless, particular kinds of animals from the water (not just the sea) are Haram and prohibited – you cannot eat frogs, or otters, based on Islamic law.

Of course, if something is truly harmful to a human, then it is seen as haram, in any case.

So, salmon is seen as Halal as in the Qur’an we can see that the Almighty Allah and his Prophets have allowed people to eat everything that comes from the sea.

Here we include all squid, lobster, shrimp, fish, octopus, crab, and of course salmon.

This also includes smoked salmon, as many people love to eat it, not only for lunch but also for a good breakfast, only in this case, you need to pay extra attention during the preparation (smoking process, or anything in between), there was a component that was not halal, and it happens.

Also, additional advice is to be careful where you buy your salmon, for these reasons also.

It would be halal also if this salon is rotten in any way, so always keep an eye out and try to eat the fresh one.