Is Jelly Belly Halal or Haram in Islam?

When it comes to industrial sweets and other food products with many ingredients, it can be challenging to determine whether these food types suit a specific diet.

Is some food halal or haram? Is it kosher? Is it suitable for vegetarians and vegans?

Almost every religion and culture in the world has some food that it considers inappropriate for specific reasons, whether prohibited by religious laws or simply not common in a particular culture.

For example, fried spiders are a favorite specialty in Cambodia, while only some from other parts of the world would dare to try this snack.

On the other hand, in the Scandinavian countries of Europe, people are crazy about Salmiakki, a savory licorice delicacy, to which the rest of the world would react with a disgusted grimace.

Things become even more complicated when it is no longer a matter of mere habits but of strict rules prescribed by religion.

In Islam, these rules are expressed through the terms halal and haram. Permissible food is halal, and what is forbidden is haram.

Muslims who follow the principles of halal standards must know what ingredients a food contains to see if it is suitable for them.

It’s not a problem in Islamic countries because mostly only halal food is offered. Besides, it’s indicated on the food, whether halal or haram.

However, it is sometimes difficult to determine which food is halal in countries where the Muslim population isn’t the majority.

It’s not only information that concerns Muslims but also everyone who lives in multicultural environments.

It is essential to know if certain food products are halal so that you can show respect for the religion and culture of your Muslim friends when you host them, want to give them something as a gift, or treat them to a meal.

Is Jelly Belly Halal or Haram?

Are Muslims allowed to eat Jelly Belly? Is this candy halal or haram?

What are its ingredients, and how is it made? Why is it allowed or forbidden for Muslims?

If you have asked yourself some of these questions, you will find the answers in this text.

Let’s clear up the confusion immediately – Jelly Belly is halal. However, this product does not have halal certification.

What does it mean?

When it comes to ingredients and food that is common worldwide and is haram in Islam, we often mean alcohol, pork and pork by-products, and meat and products from animals that weren’t slaughtered following halal principles.

While for meat and products containing meat, it is generally simple to determine its origin and whether it is halal or haram, things are not so simple regarding other foods.

In the candy industry, on the list of frequently used ingredients, alcohol and gelatin are the most problematic.

Gelatin comes from collagen in pigs, cattle, horses, and other animals’ skin, bones, or other tissue. Therefore, this product is haram for Muslims.

The good news for candy lovers is that Jelly Belly does not contain alcohol or gelatin, according to official information from the manufacturer’s website.

Although Jelly Belly, in its huge offer of about a hundred flavors, also has several alcoholic ones, including Gin&Tonic, Mimosa, Margarita, Moscow Mule, and Strawberry Daiquiri, none of these jelly beans contain alcohol.

When it comes to gelatin, the company states that it does not use animal gelatin in its production.

According to everything we have said so far, jelly belly is a halal food.

However, there is one detail on which the various sources can’t agree. It’s about food coloring.

Most people don’t think about how different candies come in such vivid and bright colors.

However, these colors don’t come from fruits and other natural ingredients but mostly from various additives that you can find on labels under different names and codes.

One of those colors used by Jelly Belly is carmine, a pigment obtained from a type of insect.

This color is found on the labels of various products under different names, such as cochineal, E120, natural red 4, and C.I.75470.

Insects are haram in Islam. However, different religious authorities interpret the use of this food additive differently.

However, this additive is only used for red Jelly Belly beans.

The company states on its website that its products are certified as kosher and suitable for vegetarians, but they may not be ideal for a vegan diet.

Jelly Belly is not certified as halal, but the manufacturer states that their products are halal to the best of their knowledge and advises those in doubt to consult a religious authority.

If, after this information, you are still determining if Jelly Belly is compatible with your halal diet, you have several options.

You can check the ingredients and consult with a religious authority whether the additives used are halal or haram.

Also, you can only avoid Jelly Belly products with potentially problematic additives.

A third solution is to abstain from Jelly Belly and choose one of the jelly bean brands certified halal, such as The Jelly Bean Factory or Haribo. 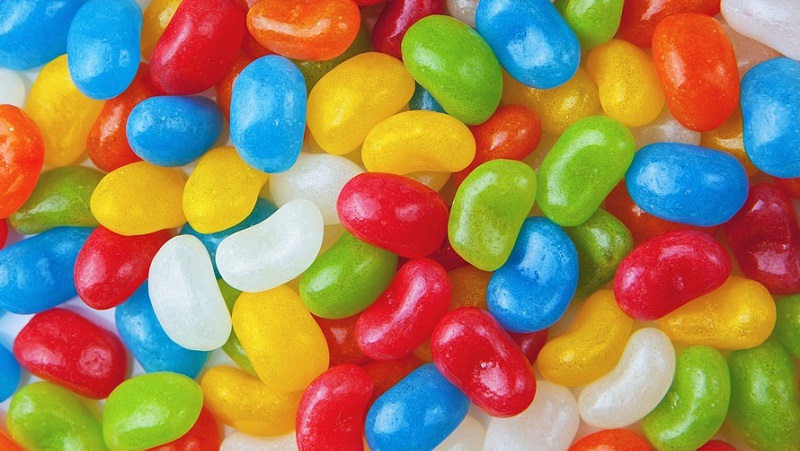 What is Jelly Belly?

Jelly Belly are sweets from the American company of the same name, from California.

The company is best known for its jelly beans, which are sold in various flavors, from traditional to unexpected, exotic, and spirit-inspired.

Jelly beans are multi-colored sugar candies that have a gelatinous interior.

In addition to jelly beans, the company also produces other sweets, such as gummies and chocolates.

There is a product line inspired by the Harry Potter book series, while some products are a tribute to famous comic book superheroes.

A few years ago, the company launched a line of jelly beans with “wild and wacky” flavors like “dirty dishwater” and “rotten egg.”

It packs them with standard flavors with a challenge game where participants never know which flavor they will get because the regular and “weird” candies are the same color.

Recently, a line of extremely hot and spicy jelly beans has been growing.

Jelly Belly beans are sold in more than 80 countries worldwide.

Halal and Haram in Islam

Like almost all religions of the world, Islam prescribes specific rules.

In Islam, what is permitted or lawful is halal, and what is forbidden, prohibited, or unlawful is haram.

Halal and haram refer not only to food but to a series of rules of conduct concerning living, dressing, interpersonal relationships, and the like.

Regarding food, Muslims have clear rules about what is halal and what is haram.

Almost all food is halal, but alcohol, pork, and pork by-products are haram.

Also, blood is haram, and carnivorous animals and birds are haram.

For the meat of an animal to be halal and not haram, it is also important to know how that animal was raised and how it is slaughtered.

Muslims are allowed to eat certain types of meat, such as chicken, beef, and mutton, but only if those animals were raised and slaughtered humanely, i.e., in the way prescribed by the Qur’an and Hadith.

Although the rules of halal nutrition are precise, sometimes it is not easy to determine the origin of all the ingredients of a food, and therefore it can be unclear whether that food is halal or haram.

Many additives in industrially produced food are of animal origin.

All this sometimes confuses halal consumers because the additives on the packaging can appear under different names.

Also, the additional problem is that sometimes not all ingredients are clearly and precisely indicated on some products.

Some companies even list their ingredients and additives as “proprietary” and do not disclose them.

Because of all this, Muslims are often advised to choose halal-certified products, which indicate that they are suitable for this diet.

After all, cross-contamination with haram food can occur in the kitchen during food preparation.

We started with whether Jelly Belly is halal or haram in Islam.

The answer is that Jelly Belly is halal, but you still need to be careful because this product is not halal certified, and some types contain an additive that three of the four main schools of Islam consider haram.

Although Jelly Belly beans come in several alcoholic flavors, none of the products contain alcohol.

Jelly Belly does not use gelatin of animal origin in its production.

Jelly Belly is certified kosher and suitable for vegetarians but not for vegans, as it uses beeswax and some additives derived from insects.

All these arguments support the thesis that Jelly Belly is halal.

However, some Jelly Belly beans (specifically, the red ones) contain the additive E120, obtained from an insect species.

Insects are haram in Islam.

However, not all Islamic schools of thought agree on whether this additive is halal or haram. Hanafi, Shafi’i, and Hanbali scholars consider it haram, and Maliki scholars believe it halal.

Since this can be confusing and sheds new light on Jelly Belly and all other products that contain this additive, you can choose several solutions.

Avoid only those Jelly Belly beans that contain E120 (the red ones), decide whether Jelly Belly is halal or haram for you based on your religious authority, or choose one of the halal-certified brands that produce jelly beans.

We hope this article has solved your dilemma about colorful Jelly Belly candies.