If you’re wondering what drinks start with F, we’ve created an exciting list.

You will find rich wines to enjoy with food, cocktails for fun with friends, soft drinks for refreshment, and something to provide extra energy.

Alcoholic Drinks That Start With F

For a start, there are alcoholic beverages.

The selection is extensive, and everyone can find something for themselves, regardless of whether they are a fan of low-alcohol or strong drinks.

The Italian type of amaro, with a base of distilled grapes and the addition of many spices and herbs, is called fernet.

This drink has a particularly bitter taste and contains 45% alcohol by volume.

In Italy, people usually drink fernet with coffee or after a meal at room temperature or with a bit of ice.

In addition to Italy, this drink is also extremely popular in Argentina, where it is traditionally mixed with Coca-Cola.

This drink’s popularity is best explained by the fact that it contributed to Argentina climbing high on the list of the biggest consumers of Coca-Cola in the world.

One of the most popular and best-selling whiskey brands in the United States is Fireball Cinnamon Whiskey.

It is a blend of Canadian whiskey, cinnamon flavoring, and sweetener, with 33% alcohol by volume.

Fireball Cinnamon whiskey was made in Canada in the 1980s and was almost unknown outside of this country for a long time.

However, thanks to the affordable price, relatively small amount of alcohol (compared to traditional whiskeys), and good marketing, it has recently experienced great popularity in the USA and many other countries.

If you were wondering which beer is the most similar to wine, the answer is Flanders red ale because of the sour taste, the usual tannins, and the lack of hop bitterness that beers are known for.

It is a style of sour ale with an intense fruity taste.

The production process is responsible for the specific taste of this drink because this drink is fermented with organisms other than Saccharomyces cerevisiae, especially Lactobacillus.

It contains between 5 and 6.2% alcohol by volume. 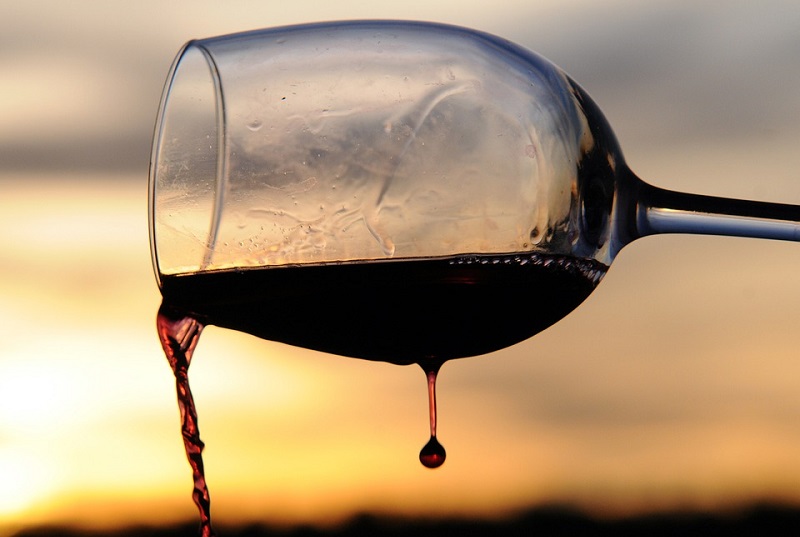 Fortified wine is a wine to which distilled spirit has been added to increase the alcohol concentration, i.e., to strengthen the drink.

The category of fortified wines includes various drinks, the most famous of which are port wine, sherry, vermouth, Marsala wine, and mistelle.

When the process of fortifying wine first began to be used, the main reason was to preserve it.

Today, this is achieved in other ways, and fortification is still used to obtain new, specific aromas.

One of America’s most famous bourbon whiskey brands is Four Roses.

The company that produces it was founded in Kentucky at the end of the 19th century.

Interestingly, this company makes ten different drinks with the help of five yeast strains and two mash bills, and then all ten are mixed to obtain Four Roses bourbon.

Four Roses are also known for the fact that, unlike other bourbons, it doesn’t indicate the years of aging on the labels.

The French 75 cocktail is one of the most famous champagne cocktails, and in addition to sparkling wine, it also contains gin, lemon juice, and sugar.

The famous French cannon inspired the cocktail’s name, and the legend is that the bartender who made the cocktail said that when he tasted it, he felt like this weapon had shot him.

This cocktail was previously primarily served in a Collins glass and over ice, while today, a Champagne flute is used.

Fruit beers originated in Belgium, but they have become available worldwide over time.

These beers are made from malt-scented plums, strawberries, cherries, and raspberries, but they can also include many other types of fruit.

These beers have fun flavors and are perfect for enjoying on a warm day or as a side to a light summer meal like a salad or seafood.

Fruit brandy or fruit spirit includes all distilled fruit drinks except those from grapes.

Fruit brandies can be made from more or less any fruit and are part of the tradition in many countries worldwide, so they have various local names.

These high-alcohol drinks (40-45% ABV) are often colorless and clear.

They are served at room temperature or slightly chilled at the beginning or end of the meal.

Fruit brandy is served in small glasses, usually between 1 and 2 oz (30 – 60 ml), and in many cultures, it is customary to drink the dose in one gulp.

Similar to fruit brandies, fruit wine refers to alcoholic beverages made from any fruit other than grapes.

Unlike fruit brandy, which is obtained by distillation, fruit wine results from fermentation.

Fruit wines can also be made from plants such as elderflower, dandelion, or rose hip.

These drinks are widely distributed in large parts of Europe and North America.

Although some non-alcoholic versions of fruit wines are on the market, these drinks typically contain 10 to 15% alcohol by volume.

Fruit wines can be of various flavors. Some are sweet and fruity, while others are sour and sharp.

The taste depends on the fruit used, the production process, and the length of fermentation.

If you are not a fan of alcohol, find something for yourself in our F list of soft drinks.

It includes some globally popular juices but also some somewhat forgotten drinks with a taste of nostalgia.

The taste of carbonated orange juice worldwide is associated with Fanta, but this is not the only flavor of this brand.

There are more than 150 flavors of Fanta in the world, but most are only available in certain regions or countries.

Coca-Cola launched Fanta as its second drink, right after the original Coca-Cola.

Fanta Orange was created in 1940 in Germany because Coca-Cola syrup was no longer reaching the German bottling plant due to the war.

It is how a carbonated drink with a fruit flavor was invented, but the taste at the time differed from what we know today as Fanta.

Fanta, as we know it today, was created in Italy in 1955 when a local bottler came up with the idea to produce it using local oranges.

Today, Fanta is the world’s second-largest brand of soft drinks and is the most popular in Europe and South America.

If you are a fan of Hollywood movies from the middle of the 20th century, you must have caught the soda fountains that often appear in them!

No wonder, in the first decades of the last century, almost every small town in America had at least one soda fountain.

These drinks still exist today in some form, and they come with self-serve soft drink dispensers.

Classic soda fountains declined in popularity in the 1970s, when the influence of bottled soft drinks and fast food grew in American culture. 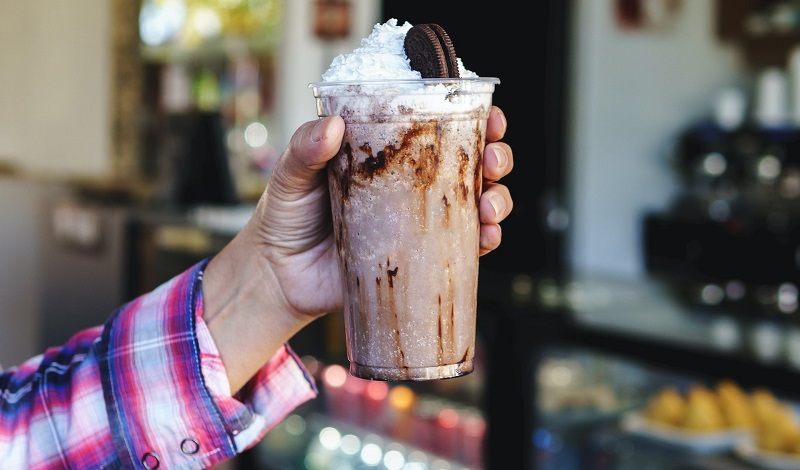 If you like sweet and creamy flavors, Frappuccino is the right choice for you.

This drink sold by Starbucks is a mixture of coffee or cream, ice, and syrup flavored with chocolate, fruit, or another flavoring.

Frappuccino is usually topped with whipped cream or spices.

There are also bottled versions of Frappuccino in numerous flavors.

However, not all Frappuccinos are so high in calories. Variants without whipped cream have significantly fewer calories and sugar, so you can always order a “light” Frappuccino.

Around the world, Starbucks offers various versions of this drink, so for example, in Asia, you can order a Frappuccino with red beans!

Frobishers is a premium juice brand from the UK.

In addition to fresh juices, this brand also offers smoothies, an assortment of exotic flavors, mocktails, and several other products. It is known for avoiding artificial ingredients and promoting ecological production.

The manufacturer started by selling apple juice, and today their products are available in pubs, bars, hotels, and restaurants across the UK.

The brand’s founder said Frobishers got its name by stumbling across the word in the phone book while searching for something that sounded posh.

One of the favorite drinks of children and many adults, fruit juice, is obtained by squeezing juice from various fruits and vegetables.

There are healthier, natural versions, but also those with added sugar, artificial flavors, and additives.

In the USA, only 100% fruit juices are allowed to be called fruit juice, while drinks that include other ingredients, such as high-fructose corn syrup, are called juice drinks or juice cocktails.

In contrast, in most of Europe, the name fruit juice isn’t a guarantee that the drink is made from 100% fruit.

There are two common ways of preparing fruit juice – mechanical squeezing or maceration without heat and solvents.

The word “juice” comes from Old French and means the liquid obtained by cooking herbs.

All over the world, the most popular fruit juice is orange juice.

Canadians are the world’s biggest consumers of fruit juice, followed by Americans. In Europe, fruit juices are drunk the most in Germany.

Energy Drinks That Start With F

Energy drinks are intended to instantly increase energy, alertness, physical endurance, and mental abilities, so they are popular among students, night shift workers, and professions that require a high level of caution and alertness, such as truck drivers.

These drinks usually contain caffeine, sugar, taurine, and B vitamins.

They are not recommended for some people because of possible side effects.

Here’s our list of energy drinks that start with F.

Firefly Tonics is a brand of natural energy drinks.

It was created to respond to classic energy drinks with high caffeine and sugar content.

The founder, in consultation with herbalists, created drinks that use only natural ingredients and serve to boost energy or relax.

There is no added sugar or caffeine in these fruit drinks.

Firefly Tonics is an English brand available in about forty other countries.

These drinks are available in several flavors, and while some serve to wake up and boost energy, others are there when you need to beat a hangover, and still, others are intended for refreshment and relaxation.

Although they used to have many more flavors, there are now two available: Full Throttle Original Citrus and Full Throttle True Blue.

While the original flavor has a tart citrus flavor, True Blue is sweeter and more like candy.

Although most people feel these drinks don’t provide the same amount of energy as some other energy drinks, Function Drinks are still the choice of many, mainly because of their organic certification.

From whiskey brands and popular cocktails, beer, and wine made from a wide variety of fruits, to carbonated and natural drinks that refresh and provide you with energy – you’ll find it all in this list of drinks that start with F.

We also remembered some somewhat forgotten drinks that our grandparents enjoyed, and we found something for those who can never get tired of the combination of coffee and sweet cream.

Pay attention to this list if you need inspiration for your next party night or a day out with a friend.

Do you have a favorite drink that starts with the letter F?