The list of drinks starting with E may not be as long as some others, but it certainly has many exciting beverages.

Whether the holiday eggnog, your beloved espresso, or the famous Earl Gray tea comes to mind first depends on your habits and affinities.

We have compiled the ultimate list of drinks that start with the letter E that people worldwide enjoy.

Alcoholic Drinks That Start With E

Here is a list of alcoholic beverages that begin with the letter E that you can enjoy on various occasions.

Eau de vie is a brandy unaged and distilled from fruit other than grapes.

The very name of the drink comes from the French language and means “water of life,” but this drink is produced in France and a large part of Europe, too.

Many famous fruit brandies come from Austria, Germany, Switzerland, Italy, and the Balkan countries, and in all these countries, they represent an important part of the tradition and drinking culture.

The list of fruits that can be distilled for eau de vie is very long and often includes some regional fruit varieties less known in other parts of the world.

However, the most famous fruits from which eau de vie is made are pear, apricot, plum, apple, peach, cherry, and raspberry.

Eaux de vie are usually bottled without aging to preserve the fruit character in the drink better.

This drink is served at room temperature or slightly chilled as an aperitif or at the end of a meal.

This clear and colorless drink is usually high in alcohol, averaging 40 – 45% ABV.

Christmas holidays are unthinkable throughout the United States, Canada, and some European countries without the favorite treat called eggnog.

Eggnog is traditionally made from milk, cream, sugar, egg yolks, whipped egg whites, and distilled spirits such as whiskey, rum, brandy, or bourbon. However, there are also versions without the addition of alcohol, mainly intended for children.

Spices such as cinnamon or nutmeg are often added to this drink, which can be served chilled or warm.

Eggnog is usually homemade, but commercial versions are mostly available between Thanksgiving and Christmas.

Previously, most homemade eggnog recipes included the use of raw eggs.

However, due to the risk of salmonella infection, using commercially pasteurized eggs or heating the milk-egg mixture is advised today.

Also, today there are some vegan versions of this drink. They don’t contain milk or eggs. 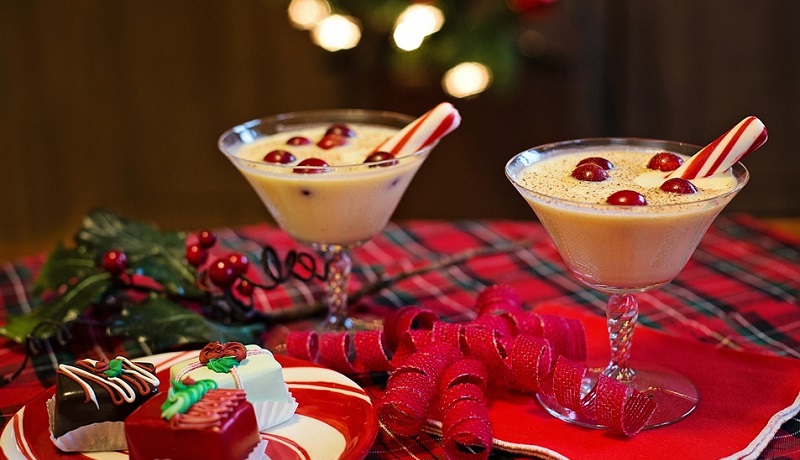 The Cuban cocktail El Presidente is made from rum, orange curaçao, blanc vermouth, and grenadine.

Even though the original recipe calls for these same ingredients, given that some are hard to find, people sometimes make El Presidente with slight variations.

In the absence of blanc vermouth, people sometimes use dry vermouth.

Also, this cocktail sometimes contains other orange liqueurs than curaçao.

However, El Presidente should be red, so you shouldn’t use blue curaçao.

There are two versions of the story of how this famous cocktail that originated in Cuba got its name. According to one, it was named after Gerardo Machado, and according to another, after Mario Garcia Menocal. Both were presidents of Cuba in the first decades of the twentieth century.

After being invented, the El Presidente quickly became one of America’s favorite cocktails. People enjoyed it illegally during Prohibition, and it became even more popular after that.

Despite the name, an espresso martini has nothing to do with a martini, as it contains neither gin nor vermouth.

However, it is served in martini glasses, which probably inspired this part of the name.

After all the ingredients are poured into a shaker filled with ice, they are shaken, strained, and ran into a chilled glass.

This famous cocktail was created in the eighties of the last century in London when the bartender reached for the first thing at hand to fulfill his guest’s desire.

The story goes that the guest asked the bartender for a drink to wake her up and destroy her (although she used a slightly more vulgar word). The rest is history.

In recent years, this stimulating cocktail is experiencing a comeback. Its popularity is growing again, so it recently ranked seventh on the list of most popular cocktails.

Here is a list of soft drinks that start with the letter E. It includes popular teas, coffees, popular brands of bottled water, and some traditional beverages.

A tea blend with a unique taste, for which bergamot oil is responsible, is known worldwide as Earl Gray Tea.

Although the English popularized this tea, it is a Chinese invention.

At first, it was made from black tea and served without milk. However, when people started to make it from stronger blends, they began adding milk or cream.

The name of this tea is mainly associated with Charles Grey, but there are several different versions of the story of how this English aristocrat and prime minister came up with the recipe for this drink in the first place.

Egg Cream, which despite its name, contains neither eggs nor cream, is a drink loved by children and adults alike across the US and parts of Europe.

It consists of milk, carbonated water, and syrup that gives it flavor – usually chocolate or vanilla.

This drink is consumed immediately after preparation to keep its characteristic appearance with a foamy head.

Because of this, manufacturers sold this drink only through soda fountains for a long time.

However, several smaller producers later started bottling it, with more or less success.

It is known that it originated in New York, and there are various theories about why egg cream is called that when there are neither eggs nor cream in it.

However, it is generally assumed that it is a mispronunciation of another phrase that sounded like “egg cream” to someone.

The childhood of many children across Europe is marked by a homemade soft drink made of refined sugar, plain or carbonated water, and flowers of the European elder.

It is not known precisely when elderflower cordial was created, but it is assumed that the Romans were still making it.

Although many people still prepare it traditionally, you can also find it selling in some places as syrup you should mix with water to get a distinctive smell and taste.

There is also an alcoholic version of this drink, made mainly by adding gin to the mix.

Tea is an essential part of UK culture. The British drink it with breakfast, enjoy the traditional afternoon tea at 5 PM, and serve it on many other occasions.

However, what is it that makes a drink English tea?

English tea is far stronger than most tea drunk around the world. Some classic blends for making English tea include Earl Gray and Breakfast tea. It’s why it is common to add milk or sugar (or sometimes both) to English tea.

The right amount of milk in English tea is determined by the color of the drink, which should have a dark brown-orange hue.

In England, people usually serve this tea with biscuits or cakes.

Espresso is the favorite drink of many coffee lovers around the world.

It comes from Italy, and the very name espresso refers to both the drink and the preparation process. People created the first espresso machines in Italy more than 100 years ago.

This coffee is made by extracting shot liquid from finely ground coffee beans with the help of almost boiling water under high pressure.

Espresso is a basis for many other coffees, such as flat white, latte, cappuccino, and others.

About forty coffee beans are needed to prepare one espresso.

There are several ways to determine the freshness of the coffee from which the espresso was made, and the most reliable indicator is the “crema,” creamy brown, airy liquid that forms the top layer of the drink and lasts about 5 minutes if the coffee beans are fresh.

National Espresso Day is celebrated in Italy every April 17 and in the USA on November 23!

Many people have espresso machines in their homes, but much more fascinating is that since a few years ago, astronauts on the International Space Station could brew fresh espresso! 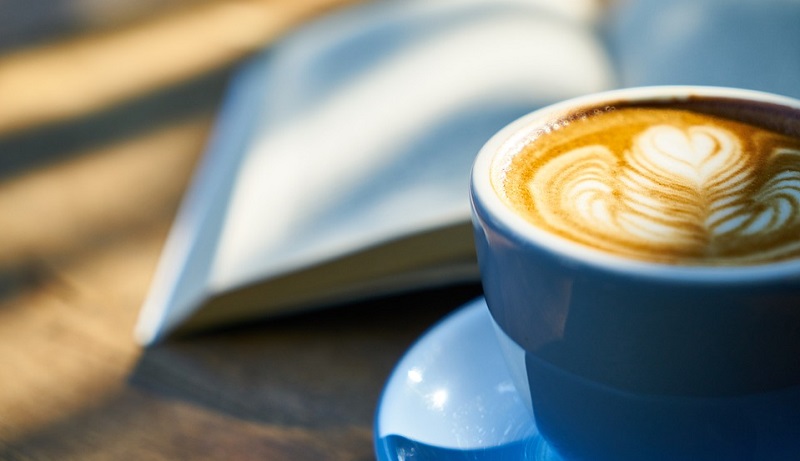 One of the world’s most popular bottled water brands is Evian, produced by a French company in over two billion plastic bottles annually.

The water was named after the town of Evian les Bains, which is located near Lake Geneva.

Evian is natural mineral water with a unique crisp taste thanks to a natural filtration process through layers of protected underground rocks.

The Alpine spring of Evian water was discovered quite an by accident in 1789 by the French nobleman Marquis de Lessert.

Energy Drinks That Start With E

E is for all energy drinks.

Energy drinks first gained popularity in Asia in the 1960s when they were designed to help workers stay awake during the night shift. The first energy drink released in Japan, Lipovitan, contained taurine, which is still in most energy drinks today.

About twenty years later, energy drinks appeared in Europe, America, and the rest of the world.

Energy drinks usually contain sugar, caffeine, taurine, B vitamins, and glucuronolactone, but they can also have other ingredients.

Although they have benefits such as an instant energy boost, they also have many side effects, so you should consume them cautiously.

Here is a list of energy drinks starting with E that we have compiled for you.

An energy shot is a particular energy drink in which the ingredients typically make up energy drinks are found in a small amount of liquid.

These drinks are drunk in one gulp to boost energy and improve cognitive functions and physical endurance.

However, just like regular energy drinks, they can have numerous side effects.

Energy smoothie is a healthier drink for increasing energy and refreshing the body.

Although it doesn’t work instantly, like energy drinks, an energy smoothie will give you a hefty dose of energy and vitamins for the whole day.

A smoothie is a drink made from pureed fruits or vegetables using a blender.

Although water is often used as the liquid base, dairy products, fruit juices, or vegetable kinds of milk are sometimes used.

Depending on the ingredients, not all smoothies are equally healthy or provide the same energy.

An energy smoothie is a common choice for breakfast because it’s an excellent way to quickly get in enough nutrients to keep you full and focused.

You can make this drink with various foods, but some of the best options are spinach, apples, bananas, avocados, and kiwis.

Enviga is a carbonated green tea energy drink in a can, created in cooperation between Nestlé and Coca-Cola.

Enviga is made in several flavors, the most famous of which are Green Tea, Tropical Pomegranate, and Mixed berries.

However, it caused different reactions from the public and a series of controversies, after which the manufacturer clarified that you could only achieve weight loss with diet reduction and exercise.

Among them are some healthy drinks that are great for refreshing at the beginning of the day, some tasty beverages that you can enjoy with friends on evenings out or at parties, and some traditional liquid treats whose recipes you can share with your children.

The next time you need a refreshing drink or something to enjoy with a meal, choose something from this list.