Here’s the challenge: how many drinks starting with the letter D can you think of in five minutes?

Sounds easier than it is?

If you get stuck, here’s our list to help you out.

It features some favorite drinks that start with D, from those perfect for enjoying festive occasions to those ideal for refreshing and re-energizing.

Here are some alcoholic drinks that start with the letter D.

From famous sparkling wines to sweet liqueurs and cocktails that have gone down in history – you’re sure to find a perfect drink on this list.

Daiquiri is one of the most famous cocktails in the world. It originates from Cuba and has numerous variations.

It includes rum, lime (or other citrus juice), sugar, or another sweetener.

Legend has it that this was John F. Kennedy’s favorite drink and that he used it to celebrate his victory over Nixon in the 1960 presidential election.

It was also one of the favorite drinks of the famous writer and hedonist Ernest Hemingway, and even one of the most famous variations of this cocktail is named after him.

If you want, you can garnish it with a lime wheel.

Legend has it that this highball cocktail got its name when an old sailor compared its hue to the color of a stormy sky.

Dark ‘n’ Stormy was invented in Bermuda and is made from dark rum and ginger beer.

This drink is served over ice and usually garnished with a lime wedge.

The name Dark ‘n’ Stormy was protected thirty years ago by Gosling Brothers Ltd of Bermuda, and many other manufacturers offer it under different names.

The famous martini has numerous variations, but all are more or less based on the classic recipe, which is a mixture of gin and vermouth.

When the Prohibition era ended, the martini came on the scene and quickly became a favorite among Americans and worldwide.

While people usually made the first martinis with equal proportions of gin and vermouth, today, it is expected that for one part vermouth comes four parts gin.

A dirty martini is more sour and salty than a regular one because it includes olive brine.

This martini version is usually served with one or two whole olives in the glass. 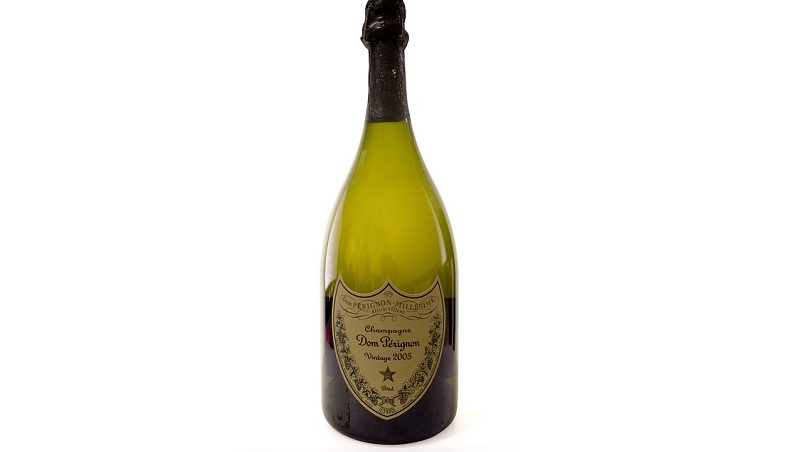 Dom Perignon is probably the most famous champagne in the world and is synonymous with quality and luxury.

This famous sparkling wine is known for its taste, unique label design, and distinctive bottle shape.

Dom Perignon is named after a Benedictine monk, who is sometimes mistakenly believed to have invented the Champagne method for making sparkling wines.

Dom Perignon is made from two grape varieties – Pinot Noir and Chardonnay, and the taste vary depending on the vintage.

This champagne is aged for a minimum of seven years, usually much longer, before it sells.

About 5 million bottles of this champagne are produced annually, so it is widely available worldwide.

It would be best if you served it chilled in champagne glasses.

The golden-colored liqueur, Drambuie, is a sweet drink made from Scotch whiskey with added honey, herbs, and spices.

If you like sweet flavors, Drambuie is the right choice for you.

Although no one knows what herbal ingredients are in this liqueur, some people believe it to be anise, saffron, and nutmeg.

Legend has it that Prince Charles Edward Stewart entrusted the recipe to Captain John MacKinnon after a battle as a sign of gratitude. The secret has been kept and passed down from generation to generation. Even today, there are only three people in the world who know the recipe for this liqueur.

Drambuie is bottled at 40 percent alcohol by volume, and due to its high alcohol content and high sweetness, some people prefer to use it in cocktails.

The fact that this cocktail has its holiday also testifies to how famous and beloved the martini is. National Martini Day is celebrated every June 19 in America.

Dry martini originally was the name of a cocktail made with white vermouth, drier than other types of this drink.

However, when you order a dry martini today, you mean a cocktail that contains a smaller amount of vermouth.

While in a classic martini, the ratio of gin to vermouth is usually 4:1, in a dry martini, the balance is 6:1.

There is also an extra dry martini in which the vermouth is present in an even smaller amount, and the driest martini is made by spritzing the inside of the martini glass lightly with vermouth before pouring in the gin.

Dubbel is a type of beer of Belgian origin.

It is a brown ale with moderate bitterness and a fruity and grainy character.

It contains between 6 and 8 percent alcohol by volume and is a common drink choice with lamb and game meats.

The first version of the dubbel was a strong brown beer brewed at Westmalle Abbey in the 19th century.

It consists of fortified wine, herbs, and spices.

The French produce this drink at 14.8% ABV, while the American version is stronger and contains 19% ABV.

Dubonnet is also an ingredient in numerous cocktails.

Here is a list of non-alcoholic drinks starting with D.

It quickly became a favorite in the Midwest and other parts of the United States.

At the beginning of the twentieth century, many men homemade root beer for their families.

One of the founders of this brand named the drink in honor of his father and all other dads.

Dad’s root beer is also known as the first drink that used to be sold in a six-pack format, and the company later marketed packs of different sizes, calling them “Mama,” “Papa,” and “Junior.”

The primary flavor contains wintergreen, licorice, and vanilla, but many other flavors are available.

Dandelion & Burdock is a carbonated soft drink produced by several companies nowadays, in more or less natural versions, but usually with added sugar.

Dandelion & Burdock is a traditional British drink that used to be made differently and usually involved a certain amount of alcohol.

The original version was created during the Middle Ages and resembled light mead.

Today, there is no alcohol in this drink, but often there are also no natural ingredients and plants from which it got its name.

However, many people in the UK enjoy the taste of this soft drink.

Dandelion-green juice is a popular drink among supporters of healthy eating.

This juice detoxifies and refreshes the body; its main ingredient is dandelion leaves and stems.

The taste of dandelion greens is usually bitter and sour, but these parts of the plant are full of beneficial ingredients and are incredibly healthy.

However, to improve the taste, other ingredients are added to the juice squeezed from the dandelion greens, such as lemon, pineapple, apple, strawberry, ginger root, celery, spinach, carrot, or cucumber.

There are many different recipes for dandelion-green juice, which are equally beneficial for the body.

Decaf coffee is made from ordinary coffee beans, but most caffeine is removed beforehand.

This drink is the choice of people who like coffee but don’t want to consume caffeine, which it naturally contains.

Decaf coffee is not entirely caffeine-free. Deleting all of the caffeine from the coffee beans is impossible, but this drink has less than 0.3% caffeine.

Apart from the caffeine content, decaf coffee differs somewhat from regular coffee in terms of smell and taste, as it usually doesn’t have the distinctive aroma that coffee lovers adore.

Although it is usually considered a healthier substitute for coffee, experts point out that consuming decaf coffee can also have dangerous effects, such as consuming unwanted chemicals and raising cholesterol levels.

Opinions about whether Diet Coke tastes as good as the original have been divided since the Coca-Cola Company first introduced this drink in 1982.

However, the fact is that this sugar-free and low-calorie soft drink has fans all over the world.

Instead of sugar, this product uses artificial sweeteners.

The company later launched Coca-Cola Zero, whose taste is more reminiscent of the taste of ordinary Coca-Cola, while Diet Coke retained its distinctive flavor.

Doppio, i.e., doppio espresso, is a double shot of espresso.

This drink allows coffee lovers to enjoy their favorite drink for longer.

The name comes from Italy, where this is a way to order a double dose of espresso, i.e., a larger beverage with the same taste and ratio of coffee and water as regular espresso.

Here is a fun fact: doppio espresso is a standard dose in most parts of the world because, in Italy, the doses of this beloved drink are half as much as in most other countries.

Dr Pepper is a carbonated soft drink and the name of the oldest major soft drink brand in America, predating Coca-Cola and Pepsi.

It was created in Texas and soon became popular throughout America. Today, it is sold almost all over the world.

In addition to the original Dr Pepper drink, the company also produces several other flavors.

Dr Pepper has a unique taste, and the complete list of its ingredients is unknown.

We usually forget it when listing the drinks, but the fact is that we should think of it first!

Drinking water is the water we use for drinking, which should be entirely safe for human consumption.

Although most of us take it for granted, safe drinking water is a problem in many parts of the world.

Water is essential for human health.

Energy Drinks That Start With D

Energy drinks are soft drinks that serve to increase energy.

However, it has been proven that these drinks can have numerous harmful effects on many people, so they should be drunk with caution and with prior consultation with experts.

Here is a list of several energy drinks that start with D.

In addition to cans, Demon Energy also offers one and 1.5-liter bottles.

Demon Energy has been in the public eye several times due to accusations that it violated the legal limits of caffeine content in energy drinks.

Also, this drink is known for its controversial campaigns.

Doubleshot Energy is a Starbucks energy drink distributed by Pepsi.

Although its primary ingredients are espresso and crema, it is presented as a product that offers more than the average coffee experience.

In addition to coffee and milk, the basic flavor contains ginseng, guarana, and B vitamins.

In addition to the basic flavor, there are also white chocolate, vanilla, hazelnut, and mocha flavors.

Doubleshot Energy comes in 15 oz cans, and the base flavor contains 29 grams of sugar, 220 calories, and 135 mg of caffeine.

Not many television series are as influential and beloved in American (and many other) societies as the animated sitcom “The Simpsons.”

Therefore, it is not surprising that the producers decided to borrow the name of their energy drink from The Simpsons.

Yet, in the popular series, Duff is Homer’s favorite beer. In reality, this is an orange-flavored carbonated non-alcoholic energy drink.

In our list of D drinks, we have presented you with several well-known beverages you can enjoy on different occasions.

We are sure you will find something just for you among the drinks listed!

Do you have a favorite drink beginning with the letter D?